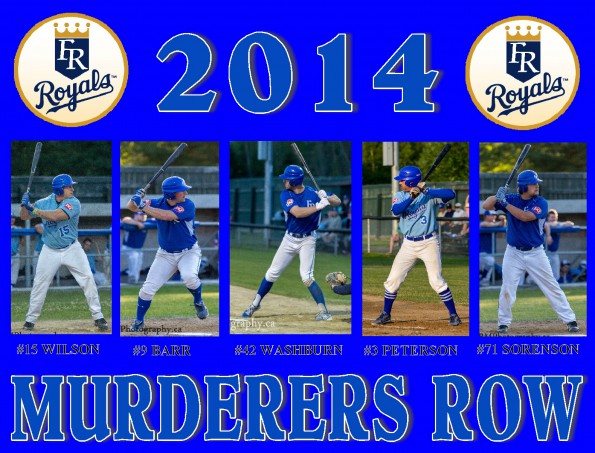 Royals field is famous for being a hitters ballpark and there have been some legendary power hitters wear the FR, MR – or Royals logo.  From Curt Moore to Don Johnson, Paul Hodgson, Rod Wilson Jr, Kelvin Hoyt, Joel Estey, Brent Hallett, Matt Stairs and Scott Harvey – there have been many big boppers take aim at the churchyard located just over the outfield fence.

The 2014 version of the Fredericton Royals is no different, loaded with perhaps some of the best power hitters in the modern era of New Brunswick Senior Baseball.  Opposing teams and pitchers face the formidable task of trying to navigate one of the most powerful lineups 2-6 in Royal history.  With 25 year veteran Derek Wilson hitting 2nd, Triplecrown winners David Barr, Mike Washburn and Jody Peterson hitting 3rd, 4th and 5th and the leagues most dangerous 6 hitter Chris Sorensen rounding out what is now known as the modern day “Murderers Row”.  Hardcore baseball fans will remember the original Murderers Row as the heart of the 1927 Yankees led by Babe Ruth and Lou Gehrig.  Though these guys are not Yankees – but are loyal, hard-working Royals – the moniker fits perfectly – like a homerun sailing high into the night sky.

Wilson, arguably the greatest all-around player to play Senior baseball in NB starts it all off hitting either leadoff or 2nd.  He combines a lifetime Royal average of .375 to go with 80 homeruns.  It should also be noted he has accumulated many more homeruns playing with other teams in the circuit.  Barr is next – and bring speed, average and power, a former Triplecrown winner with a lifetime average of .411 with 68 homeruns.  Mike Washburn hits 3rd or 4th and is the clear cut best in the league today with a  wooden bat in his hand, winning the Triplecrown last summer and on his way to another in 2014.  He combines a career .390 average with 28 homeruns.  Hitting 4th or 5th is 17 year veteran Jody Peterson who is the only Royal to ever accumulate 500 career hits while maintaining a .393 average with 99 homeruns – 1 shy of being the 1st to mash 100 homeruns in Royal blue.  Providing the protection to these bangers is the big man Chris Sorensen who hits 5th or 6th and carries a .322 lifetime average with 31 homeruns.

The 5 man Murderers Row of Royals present an intimidating presence at the plate – and on the field – helping lead their teams to 9 championships in 12 years.  If the bats stay hot, and the balls keep flying into the night sky the 2014 version of the Royals could be back on top again.

Catch all the action every Friday night at Royals Field.