By: Karissa Donkin GTA, Published on Tue May 28 2013
as printed in the Toronto Star 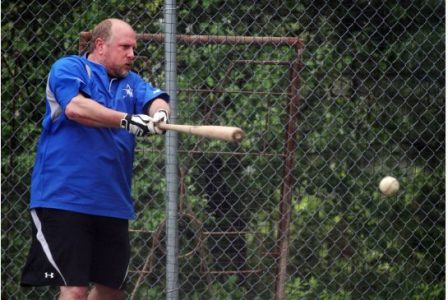 You could call it a comeback.

On Friday, he’ll make his home debut with the Fredericton Royals of the New Brunswick Senior Baseball League. It’s the highest level of amateur ball in the province, but a far cry from the big-league action Stairs once saw.

He’ll play at Royals Field, where 250 to 500 people typically crowd into the bleachers to watch a regular season game. The team expects Stairs’ appearance will triple that number. He may even draw a capacity crowd of 2,000.

As he drives into the park, he’ll have to navigate Matt Stairs Way — named in his honour after he won the 2008 World Series with the Philadelphia Phillies.

The 45-year-old, known for his wicked hitting on 13 different teams, hasn’t played seriously in two years. After retiring in 2011, he moved his family back to his hometown of Fredericton.

Stairs decided to play again with the intention of putting on a good show for all the local folk who once travelled to see him in the big leagues. He’ll serve mainly as a designated hitter but will also see some time in right field.

“That’s the biggest reason why I played this year, is to give the fans a chance to see me play,” Stairs said.

“This is a guy that really has nothing to gain and everything to lose by putting his reputation on the line to come back and play in this league,” Lint said.

“He’s just here out of the goodness of his heart.”

Stairs first pulled on a Royals jersey nearly 30 years ago, when he was an up-and-coming shortstop vying for the attention of professional scouts. It worked.

Since then, he has become New Brunswick’s favourite baseball son, a sporting icon who is known as much for his talent as his humility.

His only apprehension about joining the team was taking a spot away from a young player.

Stairs hasn’t seen a live pitch in two years and he doesn’t want to set expectations too high.

“I know it is a smaller field and let’s just hope that I can hit the ball in the air,” he said.

But the people around him know he can still hit a ball really far — the skill that earned him the moniker “professional hitter” in the big leagues.

In February, practising at a small indoor field, Stairs showed a hometown crowd that he still has it.

When he stepped up to bat, the place went silent. His teammates — many who grew up watching Stairs play — stopped what they were doing. All you could hear was the crack of the bat and the ball soaring just like it did when he was in the majors.

It gave Kristian Dewar, the Royals vice-president of baseball operations, butterflies in his stomach.

Coaching a former major-leaguer seemed daunting at first to Lint. But his nerves have evaporated thanks to Stairs’ friendly personality.

“There’s not really a whole lot that I’m going to be able to teach him or tell him,” he said. “The good side of having Matt around is he’s probably going to be teaching me and my other coaches.”

He’s teaching the kids that used to watch him play, too. Some are eager to take in wisdom from him, while others are still a bit nervous of being around a player of Stairs’ calibre.

Stairs hasn’t been back to play on Royals Field since he was a 16-year-old.

While most people will be in awe, and teammates will be excited to be on the same field, Stairs says he’s the one who should feel honoured.

“Knowing that you’re a part of a great history of senior baseball going on in Fredericton, it’s quite an honour.”

When he goes back to his hometown park, where he got his start, he’ll see the sign: Welcome to the Home of World Series Champion Matt Stairs.

The sign is accurate again. Matt Stairs is home.