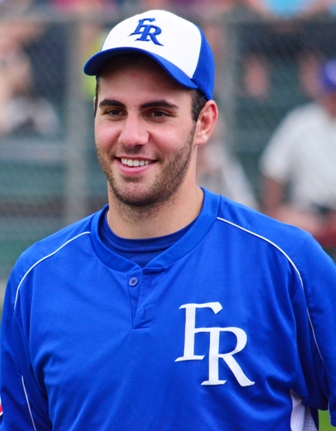 Wait, a name? How much value can a name hold?

Well, when your last name is Washburn, playing sports is almost as natural as breathing.

Mike Washburn comes from a long lineage of athletes. His grandfather on his mother’s side, Tommy Thompson, is a prominent figure in Fredericton baseball history and has a field named after him; his other grandfather, Leroy Washburn, is one of Fredericton’s most decorated athletes, very active in the track and field scene and attends all Royals senior home games; his father played four seasons in the Canadian Football League for the BC Lions and Montreal Alouettes; and his brother Mackenzie, is a guard for the UNB Varsity Reds.

“This was one of the best experiences I’ve ever had as a student athlete,” said Washburn about his time spent in Vauxhall. “It helped me grow as a student and person while growing as an athlete. Vauxhall provided me with every opportunity to further pursue my baseball goals and I would recommend to any young athlete serious about going to the next level to consider a program of that caliber.”

A big part of his decision to focus on baseball stemmed from his selection to the Canadian Junior National Camp in Florida following the Canada Cup tournament.

Despite being 22 years old, Washburn is currently in his third season with the Fredericton Peterbilt DQ Royals and his having a monster season.  He is currently 4th on the team in batting with a .426 average, 1st on the team in RBIs with 17 and tied for 2nd in home runs with 4.  Not bad company he is keeping atop the team leader board, as he sits with Royals’ greats Jody Peterson, Dave Barr and former MLB player Matt Stairs in almost every category.

Manager Mike Lint couldn’t be happier with the progress Washburn has made since he started out with the team.

“He’s always been a big talent coming up through minor ball and always played a step above. When it came time for him to play junior ball he wanted to take the leap to senior ball so he reached out to us and wanted to know if he could come try out for the team, and we didn’t make him any promises as we told him if you’re good enough to play you will play. He wasn’t an everyday player when he first started, and the second year he worked his way into pretty much an everyday spot and then this year, well you can see what he’s done so far.”

A lot of Washburn’s progression as a player can be placed on his playing south of the boarder. Following his time at Vauxhall Washburn spent two years at Hill College in Hillsborough, Texas before heading closer to home to finish his undergrad at Central Connecticut State University, a Division I school.

“The caliber of baseball was very good for a small Division 1 conference, and I definitely grew mentally as a player on top of always trying to get better physically.”

With college baseball being a thing of the past, who knows what baseball holds next for Washburn. He has his sights set on a step higher than Division I baseball though.

“I definitely have an interest in playing some kind of professional baseball. I currently am not sure when or where I could pursue this, so I will take the next year to train and seek out opportunities to play some sort of next level baseball.”

Lint is positive baseball has something special for his player.

“He could very well, depending on how long he wants to play the game, go down as one of the best ever to play in the province, and it wouldn’t be out of the realm of possibility to say that in a year or two, if not now, that he would be one of the best amateur ball players in Canada.”