The Royals, who have waited through a week of rain to get going were delayed once again – if only temporarily. A little more than 25 minutes into the trip to Chatham the brakes caught fire on the team tour bus and the team was left stranded in Durham Bridge.

A new motor coach arrived and behind a strong effort from veteran Derek Wilson the royals used a balanced attack to win 12-3 on the mirimichi.

Much like the teams tour bus on this night – there are no brakes in the Royals offense.  Deep in firepower – the royals featured a new look lineup for the season opener with the man known around MLB ballparks  as “The Professional Hitter” Matt Stairs stepping into the clean up spot and Jody Peterson hitting 2nd.  Stairs was 2 for 5 in his return, with an RBI single and 2 hard line outs.  Hitting behind Stairs in the order was young Royals star Mike Washburn, just back from a 2 year stint at NCAA Division 1 College in the States launching a long deep 3 run home run to right center field.  Veteran 3 bagger John Burns added 3 doubles and 3 RBI  in a game where every Royals hitter had a hit. 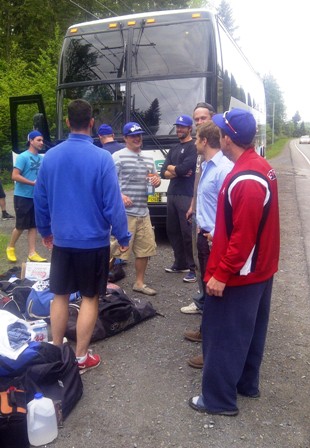 Wilson, wearing the familiar #15, making his much anticipated return to Royal blue knocked off some early inning rust to settle down and quiet the Ironmen attack.  He went 5 strong to pick up the win – adding 4 more strike outs to his senior baseball leading 1113 total in the win.  (now 1117).  Wilson, who was DH’d for – as is part of the coaching staffs handling of starters – will join longtime Royals star Stevie McCarty (away for school) back in the line up Friday night as both are expected to make their season debuts at the plate.  Dan Murphy will get the nod on the hill in Matt Stairs return home.