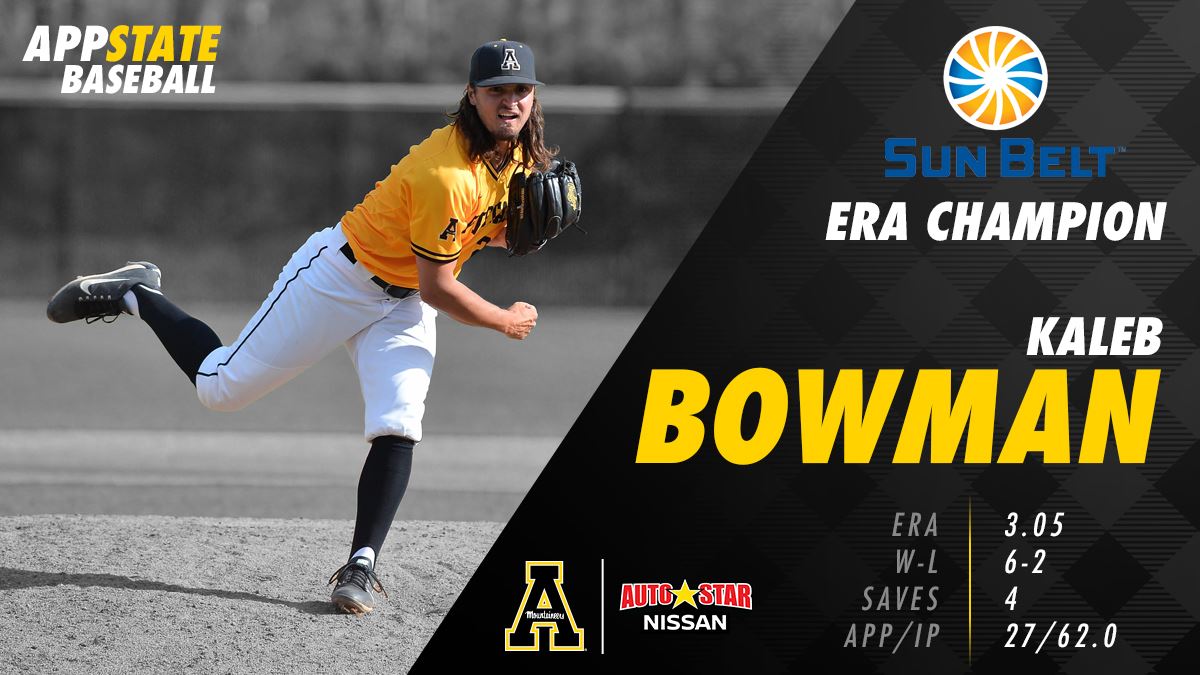 A player must pitch at least one inning per team game to be eligible, and Bowman led the league with a 3.05 ERA over 62.0 innings for the Mountaineers (22-31). Those innings came in 27 appearances out of the bullpen, as he had a 6-2 record with four saves to finish his two-year career in Boone with an 8-2 mark.

The second-place ERA among eligible Sun Belt pitchers was a 3.47, and Bowman was the only full-time reliever to qualify for the ERA title. In league play, he had a 2.97 ERA, 4-1 record and three saves in 36.1 innings spread over 15 appearances.

Bowman’s most dominant stretch of the season occurred from March 5 to April 13, when he allowed one run over the course of 26.1 innings that included him earning back-to-back road wins against Louisiana and back-to-back saves against ULM.

Bowman’s 62.0 innings appear to be a school record for a full-time reliever — Josh Fish made one start and pitched 69.1 innings for App State in 2005 — and the last year a full-time Sun Belt reliever won the ERA title was 2014.

Bowman recorded an average of seven outs per outing in 2019, notably closing the season with 4.2 innings of scoreless relief to earn a win at Coastal Carolina and 4.2 more innings in the Sun Belt tournament against Louisiana. He took over in the second inning of a close game and held Louisiana scoreless for his first four innings of work.

Other highlights included 4.0 scoreless innings to earn a win against Michigan State and five strikeouts in 3.0 sharp innings during a road win at NCAA Regional No. 2 seed FAU.