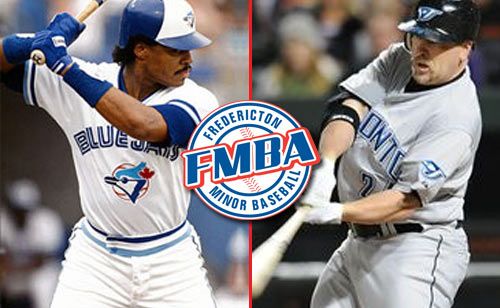 Tuesday night on Baseball Hill four of your Fredericton Royals will have their work cut out for them as they attempt to outslug Jesse Barfield and his 241 career MLB home runs.
The City of Fredericton has declared the week of June 24 through June 28 Fredericton Minor Baseball Week, and to honour this FMBA will be putting on a Royals Baseball Camp, as well as the home run derby.
Standing in Barfield’s way of the home run crown will be Chris Sorensen, Dave Barr, Jody Peterson and former MLB slugger Matt Stairs.
The competition Barfield will be facing are no slouches. Peterson, who is the all-time leader in Royals’ home runs has 91 career New Brunswick Senior Baseball League home runs, while Barr has 61, and the youngest of the crew, Sorensen, has 25. And we certainly can’t forget about Matt Stairs, who has 265 MLB home runs over a 17 year career.
While the majority of the focus will be on the baseballs flying out of the park, it can’t be forgotten that the main purpose of the home run derby will be to serve as a fundraiser for FMBA, with all proceeds going to the association, in an attempt to purchase some new equipment, new jerseys and basic team necessities.
FMBA president and Royals’ first base coach Paul Hornibrook says that last year’s success, which featured Tony Fernandez, spawned this year’s camp. “It sort of piggybacked off of last year and having Tony here,” said Hornibrook. “We are creating a reputation of being able to put on a good camp here. We’re very glad to have Jesse here. Jesse and Matt are two well-rounded, well accomplished major leaguers, and we are happy to have them here showing off their home run power.”
Having Stairs suit up for the Royals this season has been a great experience for the players, the league, and the city of Fredericton.
“It’s going to be pretty cool. I mean, I follow my baseball pretty closely, so I can identify with Jesse and Matt and what they’ve accomplished,” said Peterson. “For them to come down and get on our field and partake in the derby for a good cause is pretty special. To be asked to participate is a pretty big honour, I just hope I don’t embarrass myself out there.”
Each year during the national tournaments they ask each team to send a representative to be included in a home run derby for the tournament, and Sorensen has been asked to swing away in a few of those, so he will be looking upon those experiences to help him out.
“It will be cool. It won’t be my first one, but having Matt and Barfield there will be great,” said Sorensen. “I’m impressed with minor baseball in Fredericton. Guys are putting the effort in to get these guys here, and it’s more for them than anything. It will be an honour to be on the field with those guys like it is any night that Matt is here.”
When asked who the favourite to win it all is Sorensen was quick to joke about getting a pool together.
“I’ve been asking around and I think Jesse is the favourite to knock off Matt, but you only get five outs, so who knows.”
The derby kicks off Tuesday night at 6:00 pm with admission being $5 for adults and $2 for children 12 and under.