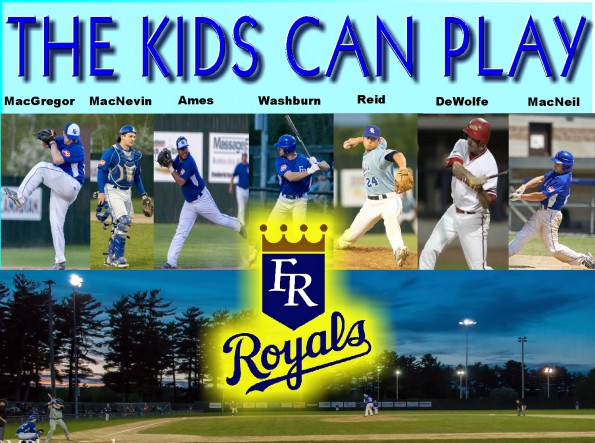 The 11-6 Fredericton Peterbilt DQ Royals are back in first place – and they are doing it with a collection of new faces.  The once veteran laden team, dependent on the long ball and an offensive powerhouse has undergone a transition to a younger, faster team – winning with steals, bunts – hit and runs and solid pitching.  The power and veteran core is still there with David Barr, Derek Wilson, Chris Sorensen, Jody Peterson, Phil Merrill and Corey Stairs – along with Ace hurler Jake Waugh but it’s the new Royals leading the surge back to the top of the standings.

Rookie of the Year candidate Matt MacGregor has pitched like a seasoned Ace, dominating NBSBL batters in the 1st half.  2013 Triplecrown winner Mike Washburn leads the league in hitting, with Shawn Reid a 2 year veteran at 20 continuing to dominate the late innings as the Royal closer.  Rookie Ryan MacNeil has planted himself atop the batting order as the new leadoff man – providing energy and speed and David DeWolfe is fast becoming a hitter to watch as he has gotten hot as of late.  Jarret Ames uses a keen eye and good bat control to work pitchers and also provides solid defense at second base while Mark MacNevin has established himself as the everyday catcher and potential power threat at the plate.

The new look Royals have a busy stretch coming up with 6 games in 6 days – starting Wednesday night at home against the 2nd place 11-7 Moncton Mets.  Thursday the team travels to Saint John before returning for another installment of Friday Night Lights at Royals Field Friday against arch rival the 11-7 Chatham Ironmen.  The team gets Saturday off before heading to Moncton Sunday for 2 games, 1 against the Hub City Brewers and 1 against the Moncton Mets.  Monday rounds out the 6 in 6 with a home game against the Ironmen.