A high powered offense lead by 3rd year slugger Mike Washburn has scored 162 runs in 17 games and has the hometown Royals off to a 15-2 start and 1st place at the half way point in the season.

The Royals will play host to the leagues top pitching team, the 2nd place Saint John Alpines (12-7) Friday night.   The Alpines feature Royal National pitching pick ups Peter Shaw & Shawn O’Toole who have both been dominant in 2013.  On Saturday the Royals travel to PEI for 2 games against the young rebuilding Charlottetown Islanders and Royals National pick up infielder and 2012 NBSBL MVP Andrew MacDonald.

League Leaders as of July 18 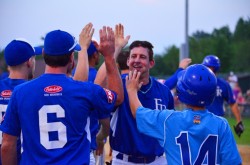